A Life of Giving: How one New Yorker has used a private foundation, a donor-advised fund, and a giving circle to give back 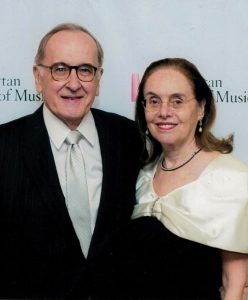 David and Susan Rahm celebrating the Manhattan School of Music, where David served as board chairman.

Philanthropy has always been a part of life for Susan Berkman Rahm, and her family remains committed to supporting nonprofits. “My twins made their first contribution when they were eight,” she recalls. “I was being honored by Girls Inc., and they gave to the organization from their saved allowance—five dollars apiece.”

What has changed is how Susan and her husband, David, give back. Decades ago, the Rahms created a private foundation to support the arts, their alma maters, and those less fortunate.

In 1999, she joined Wellmet Philanthropy, a giving circle at The New York Community Trust, which supports nascent City nonprofits. In the 20 years since it was formed, Wellmet has distributed more than $2.8 million. “Wellmet is one of the greatest things I’ve ever done,” Rahm says. “I’ve learned so much about New York City and met the super people who run these small organizations.”

After the recession hit in 2008, the Rahms began to give more to groups providing food and shelter, and strengthening the social safety net. And when running their private foundation became a burden, they realized they could save time and money by dissolving it into a donor-advised fund in The Trust.

“The Trust makes it easy to give back,” Rahm says. “Plus, I’ve learned about great nonprofits from attending events for donors.”

Learn more about how to give through The Trust.