All In for a Beloved Park: A New Alliance Cares for “The Crown Jewel of the Bronx”

IN DEEP: In Van Cortlandt Park, volunteers remove invasive species from a pond.

A new alliance cares for “the crown jewel of the Bronx”

While New York City is known for its tall, glittering skyscrapers, it is its green, peaceful parks that are most beloved by New Yorkers.

At one and a half times the size of Central Park, Van Cortlandt Park in the Bronx is the playground, oasis, and backyard for a diverse, densely populated section of the city.

With a recent grant of $60,000 from The Trust, the Van Cortlandt Park Alliance is making physical improvements and giving residents opportunities to care for the park, which has 650 acres of forest, a lake, eight cricket fields, two golf courses, and is home to more than 100 species of birds. 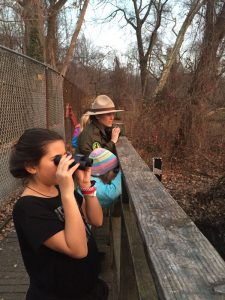 Girl Scouts watch birds with the help of a park naturalist.

The Alliance brings together the Parks Department, the private sector, community groups, and residents. This public-private partnership will create a wetlands wildflower garden, repair nature trails, organize community programming, and survey residents to see how the park can best serve them.

The group also will recruit and train more volunteers and interns to restore habitat and clean litter.

“Over 2.5 million people a year play, hike, swim, and enjoy nature in Van Cortlandt Park, the crown jewel of the Bronx,” said Van Cortlandt Park Alliance co-chair Nina Habib Spencer. “Our diverse community is the Alliance’s reason for being—to raise private and foundational support for free programming in the park, and to restore and maintain our vast natural areas for everyone to enjoy. In a city of small apartments and limited space, partnerships like the Alliance make it possible for all New Yorkers to connect with nature when they need to.”

“Groups like the Van Cortlandt Park Alliance are critical to the quality of life we enjoy in an urban setting,” said Eric Soto, Con Edison’s director for Bronx regional and community affairs. “We are so deeply proud of our partnership that enables the Alliance to maintain the park, develops the virtues of stewardship in young adults, and enhances the park’s many features for the enjoyment of the city’s residents.”

The Alliance is one year old and is the result of a Trust-supported merger of two long-standing stewardship groups that advocated for different stretches of Van Cortlandt Park.