An Education in Advocacy: Drawing from his experiences, Babou Gaye learns how to fight for justice

“My experience has shown me the extremes of a segregated school system. It starts with an elementary school upstate where I was one of very few Black students. In fifth grade, I moved with my mom to the Bronx, and ended up in the zoned middle school. It was the first time I went to school and everyone looked like me. But it was also a struggling school. We lacked resources from laptops to teachers. 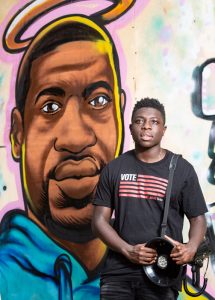 My mom believes education is everything, so she wanted me to go to a specialized high school. My school counselor was very blunt. She said, “It’s going to be very hard for you because of the way you look and because of where you live. You are going to have to work twice as hard.” That whole summer I was at the library, printed out practice tests, and just studied. I took the test for the Bronx High School of Science and passed, but it was only a short-term victory. When I got there, I saw around six other black kids and I’m like, ‘Yeah, this is a problem.’

That’s when I knew the problem was systemic. Before that, I just knew that the people who looked like me were not doing as well as the people who didn’t look like me. It was kind of disheartening. It’s a lot to be 13 or 14 and feel like the whole world is stacked against you, preparing you to fail. I wanted to do something.

I heard about the Teen Activist Project at around 15 and saw a lot of cool opportunities—like being able to talk to elected officials. It looked like the gateway to making a difference and being an agent of change.

One thing I learned is anyone can be an activist. You don’t need to have this fancy vocabulary and know all the inside outs of the political system. You just need a message and a voice.

We went to Albany to lobby state officials. Doing just that and then being able to lead others in doing so was probably my most fulfilling experience as an activist.

The recent marches that followed the murder of George Floyd have been a rollercoaster for me. It’s really the culmination of the felt injustices. I think this one was able to reach more than the Black community because of how graphic it was. It flipped a switch in a lot of minds. People realized it’s not enough not to be a racist, you have to be anti-racist.

I always thought I was a science person, but in high school, I realized I wanted to be an advocate, whether that means being a lawyer, a political commentator, or running for office. I want to be able to influence policy and advocate for my community in whatever capacity I can.”