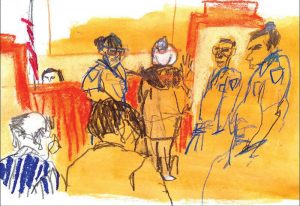 COURT IN SESSION: A Court Watch NYC volunteer drew a courtroom sketch while taking notes on the charges brought and bail sought by prosecutors in arraignment court.

The Trust is focused on simplifying and improving New York’s archaic and convoluted court system. With 11 different trial courts, “the system is inefficient, inaccessible, and inequitable,” says Eve Stotland, The Trust’s program officer for Human Justice.

So-called “poor people’s courts”—Family Court, Criminal Court, and the housing part of Civil Court—serve mostly black and Latino and low-income litigants. Compared with other trial courts that deal with corporations and wealthier litigants, these venues are underfunded and overcrowded.

The time is ripe for reform. New York State Chief Judge Janet DiFiore has committed to court simplification, and the chairs of the Senate and Assembly Judiciary Committees have followed her lead, creating an unprecedented opportunity to fix the system.

With $140,000 from The Trust, the Fund for Modern Courts will lead a campaign to amend the state constitution and streamline the 11 existing courts into two—Supreme Court and District Court.

New York is putting criminal justice reforms into practice, including raising the age of criminal responsibility to 18 and eliminating cash bail for most defendants. District attorneys, and the hundreds of assistant district attorneys (ADAs) who prosecute criminal cases, must enact these policies.

Through blog posts, social media, and earned media, these watchers noted that despite commitments by the Manhattan and Brooklyn district attorneys to stop prosecuting low-level marijuana cases, both offices continued to file charges.

Court Watchers also reported that prosecutors were twice as likely to request bail—as opposed to no bail—for drug crimes if the accused was black. This year, a $90,000 grant will help VOCAL-NY continue to expand the program.

“Not only has the program been illuminating for the public, but we’re finding the district attorneys themselves are being forced to respond to how their ADAs are putting policy into practice,” says Alyssa Aguilera, co-executive director of VOCAL-NY.

A tenant in the Bronx, who was seven months pregnant, was locked out of her rent-stabilized apartment by her landlord. She tried to file an illegal lockout petition with the Bronx Civil Court, but was told she had to file the case in Housing Court. So, she trudged nearly a mile to Housing Court, where she was told by yet another clerk to go back to the Civil Court to file the petition. When she started to cry, the sympathetic clerk searched for an illegal lockout petition form and helped her file it there.