Note from a Donor: Lessons from The Luckiest Generation 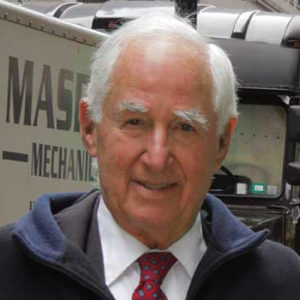 I’m writing as a member of what Tom Brokaw dubbed “The Greatest Generation.” I prefer to think of us as “The Luckiest Generation”—at least those who survived World War II unscathed.

Consider: Many of us received a free education with the GI Bill, then entered the workforce during an economic boom. We could start to save money, buy a house, and make investments that have mostly grown for the past six decades.

At 92, I look back on my great luck. I entered the University of North Carolina in September 1939 at the start of the war in Europe. Pearl Harbor was bombed during my junior year. I graduated early, joined the Air Force, became a B-24 bomber pilot, and flew combat missions out of Italy.

After the war, I went to Harvard Business School—yes, paid for by the GI Bill. That MBA got me a job with Mack Trucks, Inc., at about $50 a week.

I later joined my father’s cocoa bean-importing business, and married Joan. Along the way, we had Peter, Edward, and Jane. When they were in school, Joan went back to classes herself and earned her doctorate. She then joined the faculty of Columbia University’s medical school.

Retirement has allowed me to devote several decades to nonprofit causes. One is a camp for children with special needs, Ramapo for Children. Another is an upstate think tank, the Rensselaerville Institute. And since buying property in Maine, I’ve been involved in conservation and water-quality preservation through lake associations.

In 1990, after my mother died, my lawyer and close personal friend advised me that I could transfer money from my mother’s estate to The New York Community Trust as a convenient way to support charitable causes in the City and beyond.

I’m happy to report that our initial investment has increased substantially, thanks to the prudent investment policy of The Trust. We continue to transfer appreciated stock each year and enjoy the benefit of a tax deduction.

When younger people tell me they’re too busy to think about philanthropy, I understand—but I urge them to consider The Trust, which can do a lot of the legwork. I’m gratified that our three children are now advisors to our fund, too.

My family values the work The Trust does on our behalf in the areas of education and the environment. It helps turn our interest into action.

– Bill Witkin, donor to The Trust