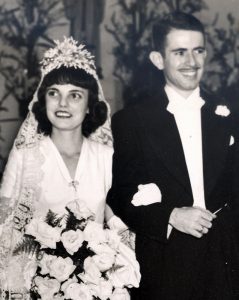 A short biography of the founders of the Lands-Cabrera Fund in The New York Community Trust.

In Germany, on March 29, 1927, Maria Salzer gave birth to a son she and her husband named Robert. His true last name, however, is the subject of some debate.

Years later, with his homeland controlled by Hitler’s fascist regime, Robert’s father, Ernesto, who was Jewish, fled the country with his wife and son. Fearing further persecution, they changed their original name—“Landberger,” “Landsberger,” or “Landsberg,” no one is completely sure—and adopted the name “Lands.” Their son, who attended boarding school and then college in Switzerland as World War II raged on, took the name when he reconnected with his parents in Barcelona. After the war, the family settled in Cuba, and Ernesto looked to start a factory like the one he’d run back in Germany. Eventually, Robert took a job in a Havana bookstore, where he met Graziella Cabrera, a member of Cuban society. Though her family lived lavishly, Graziella emerged a quiet and introverted “bookworm,” according to her niece and goddaughter, Graziella “Grace” Cabrera-Miron.

“They seemed like kind of an odd couple,” says Newton Nash, Robert and Graziella’s lawyer, “because she was so withdrawn, and he was this really outgoing guy.”

Robert Lands—whom everyone called Bob—parlayed his gregarious disposition and charming smile into an executive position at the Cuban offices of Compton Advertising, a New York City-based firm. As Fidel Castro’s revolution loomed in the late ’50s, Bob was transferred to San Juan, Puerto Rico, to handle Compton’s Eastern Airlines account, a move welcomed by Graziella, whose family had historic ties to Cuba.

“We’re a family of exiles,” says Grace, referring not only to Bob and Graziella, but also Bob’s parents, her grandparents on both sides of her family, and at least two of her great-grandfathers, who served in pre-Castro Cuban governments. 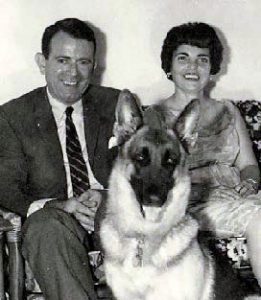 Robert and Graziella with their dog

When Bob was transferred to work at his company’s Madison Avenue headquarters, he and Graziella bought a home in Wilton, Connecticut, about an hour north of New York City. Their niece would visit and recalls Graziella’s love of gardening and Bob’s rambunctious laugh. Bob also enjoyed smoking tobacco with pipes he collected during his travels abroad for work. Grace describes both of them as very smart—though, unsurprisingly, Bob would be more likely to show off his intellect.

For a time, Bob and Graziella lived in Spain while Bob oversaw the European operations of his company, now renamed Saatchi & Saatchi. In an article he penned for publication, he expressed concern that the United States might one day lose its foothold as a world power because fewer young people were studying math and sciences, opting for law or liberal arts instead. Today, those who lobby to increase funding for math and science education observe the same phenomenon. As it turns out, Bob’s article was a precursor of the Lands’ charitable efforts.

Between Bob’s professional success and their inheritance, money was of little concern. However, as their lawyer Newton puts it, “They didn’t spend.” The pair lived humbly, and although they were very close, they never had children. Their niece Grace suspects all the moving around in their early years might have been a contributing factor.

That, along with memories of a “distant relationship” with Bob’s parents, might have influenced his feelings about having children, she says. “He just was not comfortable talking about his past, like a lot of people of his generation.”

Not long after he retired, Bob died of cancer at age 60. While he was ill, they moved to Coral Gables, Florida, Grace says, so Graziella would be closer to her family after he passed.

“He wanted to make sure she was taken care of the rest of her life,” Grace says. “I know she missed him terribly, but she wasn’t the type of person who talked about her feelings.”

In 2013, shortly after her 92nd birthday, Graziella Cabrera-Lands passed away in her home in Coral Gables. In her will, she designated part of their estate to fund college scholarships for math- and science-minded students with financial need. Before Bob’s passing, Newton had identified The New York Community Trust as an organization that could be trusted to handle such a specific fund.