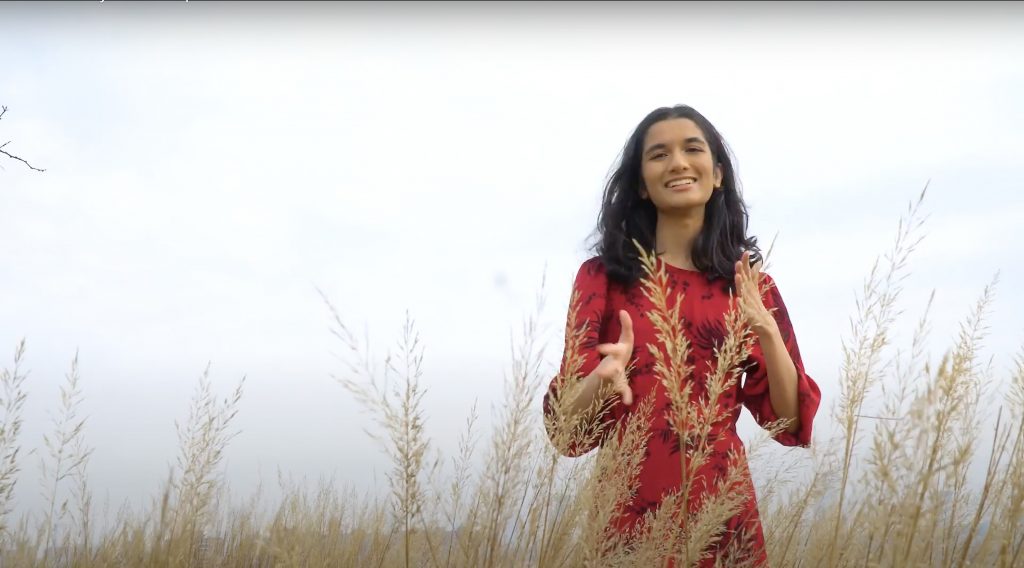 Meera Dasgupta, 18, is a former participant of Girl Be Heard and a Van Lier Fellow at Urban Word. Raised in Rego Park, she was both the first Asian American and the youngest United States Youth Poet Laureate to serve. Photo by Simbarashe Cha

“Poetry worked with my journey in activism because I believe even one voice has the power to change minds. Because changing a single life means that you are changing the world.

In what I call “artivism,” you utilize your words and the lived experiences of the communities around you to express the emotions that often lie in tangent to the statistics about an issue such as climate change.

After I presented as a finalist at the citywide youth arts program Climate Speaks in 2019, someone from the audience told me that the words I shared made her feel braver. That resonated with me because I used to have stage fright.

Support from the communities I found through Urban Word, Girl Be Heard, and the youth poetry communities in New York gave me the strength to get up on stage and speak about social justice issues. I found people who were just as passionate as I was about uncovering the things that often go unheard, the things that we often might not see on the news.

Being the U.S. Youth Poet Laureate in 2020 was a privilege. You have to not only see that it’s a privilege, but find ways to use it to empower those without the same privileges. I would push myself to not only find the people in the communities that I knew, but to reach people who don’t have these platforms, who do not have access to technology or the Youth Poet Laureate network.

I feel as though young people today carry the weight of the world on their shoulders—we have so many things that we continuously have to push back on to find not only a seat at the table, but to remake the table into the image of what we hope it to be.

Girl Be Heard was like a family. We not only created art together, but we found joy. We took a multitude of issues and embodied characters through a musical to showcase that even in the darkest of times you can find joy. We would discuss difficult things while at the same time there was so much laughter, so much creativity. Imagining a future—and acknowledging that in that future there is light—is the first step to walking towards it.”