Helen Merrill: The Woman Who Was The Theater 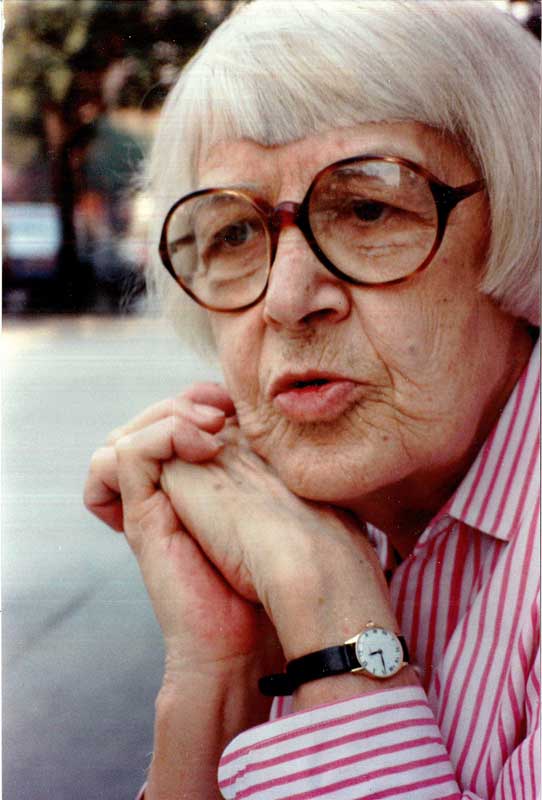 A Favorite Helen Merrill story has it that she appeared one evening at a well-known off-Broadway theater dressed in her usual self-designed uniform of buttoned-down shirt with cuffs turned back, blue blazer, khaki pants, and sneakers, topped by a long mink coat, and took a seat while puffing away as always on an unfiltered cigarette. Indignantly, the house manager approached the tiny, elderly woman, protesting, “You can’t smoke here. This is a theater.” Unfazed, Helen Merrill exhaled and shot back, “That’s where you’re wrong.  I AM THE THEATER.”

Indeed, Helen Merrill, theatrical agent and mentor to scores of aspiring playwrights, directors, designers, and composers, was the theater! While she was not a force in the creation of glittering Broadway productions or Hollywood megamovies, she had a commanding presence in the adventurous world of the alternative theater. Her focus always was on discovering new talent and she found it among the young artists emerging in the off-Broadway and experimental theater.

Helen took an adventurous approach to life even in her youth. She grew up in Cologne, Germany, the oldest of four children and was known as the strong-willed rebellious one. “She was an early hippie,” remembers her sister, Anjelica Merrill Wender. At 13, the young Helen moved out of the family’s comfortable home and set up her own living arrangements in the chauffeur’s quarters, which she decorated with African artifacts and candles. These were the ’30s, when German boys and girls were drawn into Nazi youth organizations with their parades and athletic events. Helen and a few friends sought to avoid the movement by spending holidays in a small shack in the countryside. Helen’s education was erratic—she dropped out of school several times but did manage to learn photography.

While the family was vacationing in Yugoslavia, word came that Hitler’s armies were on the move. The Merrills determined then to leave Germany. The parents and two of the children drove through Germany to Holland—Helen and a brother hitchhiked—and together they boarded a ship to America.

Helen soon settled in New York City, where she tapped into her Munich training as a photographer to land a job as an apprentice to a well-known commercial photographer. Eventually, she was able to open her own studio, specializing in photographs of prominent musicians and theater personalities. Her skill and drive enabled her to move among the leading artists—the members of the New York Philharmonic, pianist Vladimir Horowitz, and many others.

Along the way, she formed an intimate relationship with the actor Anthony Perkins, which would endure for more than a decade. They shared a house and for a time were owners of an art gallery. She was 14 years older than Perkins, and Charles Winecoff, in his biography of Perkins, portrays her in the role of protector to the temperamental young movie star. Theirs seemed like a Pygmalion in-reverse relationship with Helen in charge. But she did accede to his wishes on one important occasion. When the movie “Psycho” became a big hit, the young star received a $2,000 bonus from director Alfred Hitchcock and wheedled a promise from Helen to grant one wish. He insisted she have her somewhat hawk like nose, broken in youth, fixed by plastic surgery. She agreed, and forever after, it was known as “Hitchcock’s nose.”

The relationship eventually foundered and she moved on and soon began a new career, this time as a literary agent. This led, in turn, to her lasting commitment to promote the fortunes of a crowd of young playwrights trying to make their way in the New York theater world. Already in her mid-fifties, but tireless and dedicated, she established Helen Merrill Ltd. In the late ’70s.

She worked out of a warren of small offices in Chelsea’s London Terrace. To be taken on as a Merrill client was not simply a business arrangement. Helen did not believe in signing contracts with her scores of talented young clients—it was always an unwritten arrangement of personal trust. She was friend and critic, mentor and instructor, and much more. Frequently, she dipped into her own funds to support a talented young client experiencing a bad time—a habit that worried her attorney, Maurice Greenbaum. Still he admiringly called her “Helen, the generous.”

She scorned traditional management practices and distrusted both computer and intercom. “Tiger, come here I want to gossip with you,” she would bellow in a strongly German-accented command to Patrick Herold, her partner. She loved nicknames, the more incongruous, the better. And she adored a good gossip, depending on a network of “moles” in offices around Manhattan—and around the country—to provide funny and lascivious details.

Although Helen always was eager to hear confidences from her young clients, she divulged very little about her own early years and when she did, she was apt to weave fantasies—about being a countess or a member of the wartime underground who helped Jewish victims.

She was totally absorbed in the work, often remaining at the office until midnight. “The William Morris Agency it was not,” signs Herold. There was the matter of re-using postage stamps. For indefinable reasons, she saved and soaked cancelled stamps from envelopes and used a toothbrush to erase telltale ink. Twice the Chelsea postmaster arrived at the front door to insist that she desist. And there was the business of reusing the unprinted sides of old press releases, a practice that frequently jammed the copy machine. She delighted in such pranks. Christmas chards and presents were recycled frequently and sometimes the gifts arrived wrapped in newspaper. 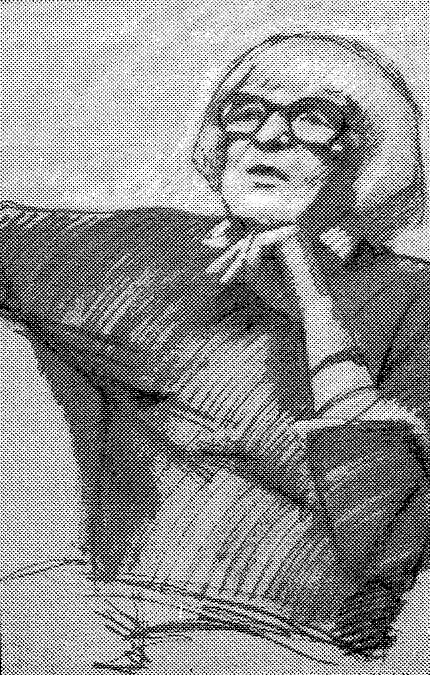 Sketch of Helen by Mark Beard

And yet she was also a woman of amazing taste and elegance, concludes Gerard Raymond, a Merrill biographer. “She attracted some of the most imaginative and individual voices of the contemporary American theater and served as a vital conduit for new talent into the burgeoning resident theater and off-Broadway.”

Helen was a familiar figure in the Chelsea area, where many young artists lived in a community tolerant of their sometimes unconventional ways. Evenings often found her with friends at that Royal Siam restaurant where, after the other patrons had gone, the indulgent owners overlooked her smoking. Thanksgiving was spent with Maurice Greenbaum and his family, as were the Jewish holidays—she could claim one Jewish grandmother—and she enthusiastically joined the Passover celebration, singing lustily off-key.

“Her enthusiasm was in discovering a new talent,” says Harold. “It is as if she became recharged each time she did. She was less interested in the goal of stardom on Broadway or managing a crossover to a Hollywood contract.” A measure of her success was the salute from the WPA Theater tendered months before her final illness became known. The directors decided to dedicate a fundraising benefit to Helen Merrill, said arts director Kyle Renick, because “she was so hands-on in her efforts, the last of a school of agents fiercely devoted to their clients.” It was a gala occasion held at the Copacabana on April 22, 1996. Celeste Holm performed—she had been a hit in the Broadway play “I Hate Hamlet,” playing an eccentric agent modeled on Helen. And playwright Christopher Durang sang newly minted lyrics dedicated to Helen. The turnout was gratifying. The guest of honor was unashamedly thrilled.

Seventeen months later, on August 18, 1997 after Helen had died of lung cancer at the age of 79, many of the same young artists would gather again, this time for a memorial in her honor. The reminiscences were a testimony to her unique contribution over two decades to the vitality of the new theater. Peter Culman, managing director of Center State, remembered her arrival in Baltimore one winter, mink coat and all, to visit his theater. “I discovered that Helen was the original Mother Courage, not hauling her wagon, but schlepping her coat…I knew she would always be there at the other end of the phone, listening and responding.”

Harold Prince recalled finding her sitting outdoors on the steps, waiting for the start of an off-Broadway production held in a church. “It was classic Helen.” And playwright Paul Rudnick remembered a Merrill trick of stomping her feet to build the applause for curtain calls, and observed that she “wrote the warmest and most detailed rejection letters I have ever read.” British director Anthony Page called her the most trustworthy of critics but also remarked that she was utterly unsentimental and capable of healthy malice and of “crucifying with an acerbic tongue people who had become infected with vainglory and monstrosity.”

And so it went with clients and former clients, each adding fragments to the picture but agreeing in the end that the spirit of Helen Merrill continued to be elusive and enigmatic. “And that would have pleased her more than anything,” said Herold. “The notion that she was a provocative puzzle would be so satisfying. She would have chortled and used her favorite word: ‘fab-u-lous!’”

As her health began failing, Helen worried about how would look after her young clients, as if they were about to be orphaned. She left virtually all her resources to create the Helen Merrill Fund in The New York Community Trust to provide awards to aspiring playwrights and mid-career playwrights who need financial help to expand their work. Helen Merrill is still THE THEATER.