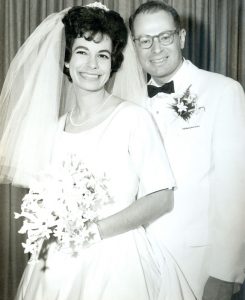 It did not take very long for the family of Rita Stern to recognize that her new beau, Stanley Wecker, was a sincere, unique, and special individual, who would likely be a part of their lives for quite some time. Back then, in the early 1960s, Stan was a tenured professor of ecology at the City College of New York, with a Ph.D from the University of Michigan. He enjoyed cooking exotic foods, writing fun limericks, and telling jokes that Rita always got a kick out of.

Perhaps seeking to win the favor of Rita’s family early in their relationship, Stan offered to bring her niece and nephew—Mindy and Brad Stern—on a nature walk through Pelham Bay Park in the Bronx.

“Not knowing any better, my mother thought, ‘How nice, he’s taking them for a lovely Sunday outing,’ dressed us in fancy finery, and off we went,” Mindy recounts. “Stan was the classic absent-minded professor, completely oblivious to our attire.”

Stan marched the kids through marshy muck, enthusiastically pointing out the various species of animals, trees, and flowers they came across, and showing off his bird-calling talents.

“We had a great time, came home a muddy mess, and my mother was just beside herself,” Mindy says. “That was our family’s introduction to Stan.” 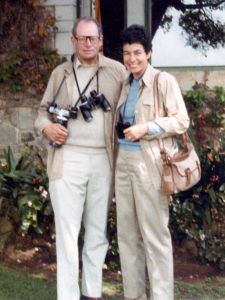 BIRDWATCHERS: Rita and Stan Wecker setting off on a nature walk.

A BIRD MAN ABOUT TOWN

When Stanley Wecker was a young boy, his mother tragically passed away, but, despite this personal hardship, Stan performed so well in school that he attended the prestigious Stuyvesant High in Manhattan. He’d go on to work in academia his entire adult life, teaching at the City College of New York, his alma mater, until he retired in 1992. In addition to his many other hobbies, Stan engaged in reading, researching, and writing oft-published papers. He was also an avid sports fan, always cheering on the Michigan Wolverines and the New York Yankees.

However, there remains little doubt that the truest love of his life was the trailblazing woman he first met on a blind date, set up by his cousin, and whom he married in 1964.

A WOMAN AHEAD OF HER TIME

Less than four months after Stan was born, Rita Stern entered the world. She grew up on Rochambeau Avenue in the Bronx and played the violin, which led to her acceptance at the High School of Music & Art in Manhattan with fellow classmate Ina Green.

Unfortunately, Rita lived with several health issues, including diabetes, a diagnosis she received as a teenager. Health problems kept her from having children and, later in life, required her to use a wheelchair.

“She was so stalwart and stoic about it,” says Mindy, who idolized her aunt. “Many other people would have let health issues make them unhappy all the time and not live life. One of the things I always admired about Rita was her determination to enjoy life to the fullest extent she could.”

Such fortitude carried Rita through her career. Although she remained passionate about music for the rest of her life, Rita graduated from Hunter College with a degree in economics, and was recruited by the Remington Rand Company to provide technical support to sales teams that dealt with some of the world’s first computers. In an address to her former high school classmates, published in their 50th reunion’s program, Rita wrote, “Being a woman ‘in computers’ was almost unheard of, but I loved it!” 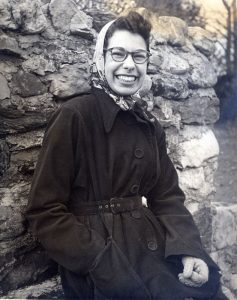 OUT AND ABOUT: Rita Wecker near her childhood home in the Bronx.

“Rita was a pioneer in so many ways,” remembers Ina. “She wanted to be a career person, in an era when women were overtly discouraged from doing so.”

Rita was assigned to help Reader’s Digest digitize its subscriber accounts, and was eventually hired by the publication to design custom computer systems. She stayed with the company until she retired in 1985. However, according to Mindy, during Rita’s tenure she realized she was being passed over for promotions and inadequately compensated due to her gender.

“When Rita discovered she was getting paid less than men, some of whom were junior to her in tenure and experience,” Mindy says, “she consulted a lawyer and eventually received a financial settlement from the company.”

SUBURB BOUND AND GIVING BACK

After Stan and Rita wed, they bought a modest home in Chappaqua, New York, about 30 miles north of Manhattan. They tended to a garden that Mindy characterizes as “their pride and joy.” They also had dogs for many years—Twig and later Pepe—and enjoyed dinners out and the theater. They loved exploring different cultures through visits to places such as China and India, but their strongest passion was nature travel, including trips to the Galapagos Islands, Alaska, Kenya, and the Amazon rainforest. 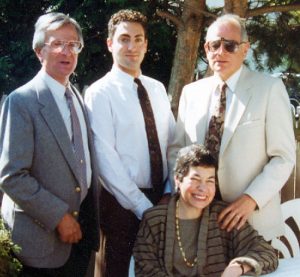 Robust pensions allowed them to continue such a lifestyle through their retirement, but perhaps of most importance to Rita and Stan was their work for the Audubon Society. Stan served as president of the local Saw Mill River Audubon Society chapter, while Rita served as Finance Chair and Treasurer, overseeing the Chapter’s endowment. Together, the couple provided 75 years of volunteer service, and were honored by the Society in 2006.

In 1970, Stan and Rita also organized Chappaqua’s first Earth Day Fair, which attracted thousands of people to the hamlet and became an annual event. “Over 100 exhibitors including schools, local and national conservation groups, and scouts mounted exhibits on conserving the environment,” Rita wrote. “The event was so successful that one State official from Utah who attended the fair wrote to me asking how to run an earth fair. He wanted to introduce [one] at the State Fair in Utah.”

Five years after Stan and Rita passed away—months apart in January and September 2010, respectively—the Rita and Stanley Wecker Fund was established in The New York Community Trust, through a bequest. Mindy is convinced that Rita “thoroughly researched The Trust as well as individual not-for-profits with a focus on environmental issues, and concluded that the best approach was not to leave their wealth to any specific organizations, but to instead leave it to The Trust to invest the money wisely, and vet recipient organizations that would best serve Stan and Rita’s mission.”

In her will, Rita also left money to the Saw Mill River Audubon Society as well as the Juvenile Diabetes Research Foundation in Manhattan. Through The New York Community Trust’s Westchester Community Foundation, the Rita and Stanley Wecker Fund is used to improve environmental quality, for conservation and preservation of natural areas, environmental education, and environmental issues relevant to Westchester County.

“They were always charitably minded,” Mindy says of her aunt and uncle. “They volunteered time and gave money throughout their lives to the causes they championed. So, it is no surprise that they decided to leave most of their estate to charity, and it speaks volumes about them.”