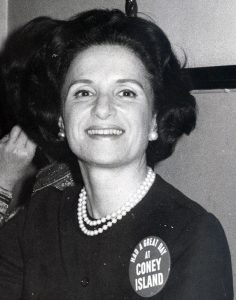 Joyce Matz (née Arnstam) was born on May 20, 1925 in Manhattan to Elsie Corday, a homemaker, and Harold Arnstam, a furrier. She grew up on West 77th Street amid many architectural and urban gems. Central Park, the American Museum of Natural History, and the New-York Historical Society were steps from her home. However, like many New York City children, Joyce took the sites for granted.

“I was surrounded by landmarks and was never affected by them,” Joyce said.*

She graduated from the Dalton School and Mount Holyoke College with a bachelor’s degree in English and minor in religion. While in college, Joyce began dating Mortimer Matz, a student at Amherst College, whom she had previously met through her synagogue’s Sunday school. They married in 1947 and had three children: John, Linda, and Suzanne. Joyce with two of her children, Linda and John.

Joyce worked with her husband as vice president and partner of Mortimer Matz Associates (later changed to Matz & Matz Associates), a public relations firm. Her choice to work was unusual for the period.

“No one understood her,” Joyce’s daughter Suzanne said. “She was a very independent woman for her time.” Joyce discovered her passion for historic preservation through an unlikely source: National Geographic. 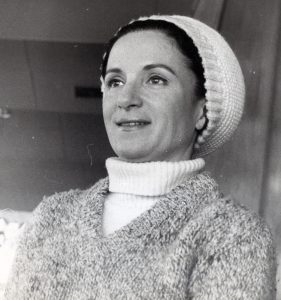 “I read an article in National Geographic that Venice was sinking an inch a year, and for some reason I panicked,” Joyce said. “I thought ‘I won’t get there in time to see Venice,’ so I ran over to Italy with my children…and became enamored with buildings.”

Joyce separated from her husband in 1979. She started her own public relations firm, Joyce Matz Associates, which specialized in historic preservation. Her connections and knowledge about local policymaking led Joyce to become a formidable force in New York City real estate.

“If you were in a preservation battle, you wanted Joyce in your foxhole,” long-time preservation activist Anthony Wood said. “She was the go-to preservation publicist.”

One of Joyce’s successful endeavors was saving several elements of St. Bartholomew’s Church (St. Bart’s), an Episcopal Church located on Park Avenue between 50th and 51st streets in Midtown. In the 1980s, Rev. Thomas D. Bowers and several parishioners wanted to demolish the St. Bart’s community house, terrace, and garden due to their expensive upkeep (while allowing the church to remain).

Joyce, who was on Manhattan’s Community Board 5 at the time, was critical of the idea.

“The thing that galled me was that the first proposal was to demolish the church,” Joyce said. Church officials did not look into fundraising or debt financing as options.

A lawsuit was initiated and the fate of St. Bart’s went to court. During the legal proceedings, a policymaker introduced a bill that would make it illegal for churches to be designated as landmarks, and therefore easier to demolish.

Joyce responded to the bill with a strategic public relations move—she brought Jacqueline Kennedy Onassis to the table.

“I always felt it was helpful to have public officials and celebrities,” Joyce said.

Ms. Onassis attended press conferences with Joyce in several locations, including Grand Central Terminal and the New York Capitol in Albany. She met and took pictures with legislators, and eventually the bill was killed.

The lawsuit, however, carried on. The case made it all the way to the U.S. Supreme Court, where the court ruled in favor of the New York City Landmarks Preservation Commission.

“We didn’t think we were going to win,” Joyce said. “That was a long fight.”

Despite Joyce’s efforts, some landmarks were not saved. On Third Avenue between East 77th and East 78th streets, there were eight “cottages” with a garden in the center. The cottages were designed by Edward H. Faile and built in 1937.

“It was a complex of two-story buildings that went around the block, and inside was a wonderful garden [with] huge trees,” Joyce said. “It was like nothing in the city.”

In the 1990s, a developer purchased the property with the intent to demolish the buildings. Joyce and her team fought to get it designated as a landmark. To help with publicity, Joyce got the support of Tony Randall and Woody Allen. She even coordinated to have them visit the cottages for a press conference.

However, some of the tenants anticipated being bought out, which created resistance for Joyce’s side. Then the New York City Landmarks Preservation Commission did not approve the designation. The case went to court, but Joyce’s team lost.

One of the designated landmarks Joyce was most proud of was City and Suburban, an affordable housing complex composed of 14 buildings on the Upper East Side. The complex, which runs along York Avenue between East78th and East 79th streets, has 1,200 apartments and houses 2,000 people. When it opened in 1913, City and Suburban was the largest affordable housing project in the country. 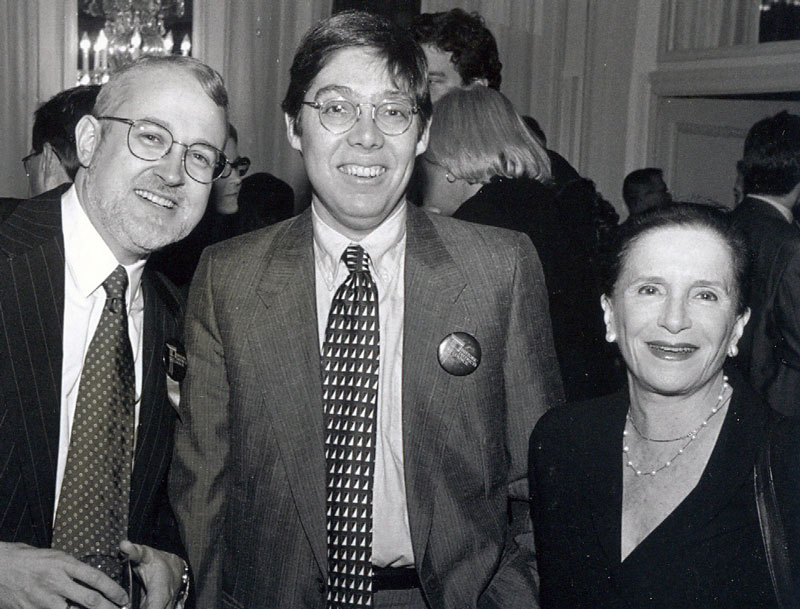 “You would go and look at it and say, this is a landmark? It’s not even pretty. But it’s so important. It’s so historic,” Joyce said.

In the 1980s a developer wanted to buy out the tenants and demolish City and Suburban for new construction. A lawsuit ensued, and Joyce was hired by the Coalition to Save City and Suburban Homes to help with public relations. The residents, however, were divided.

“We lost a lot of tenants, and some of them really fought us—they wanted the money,” Joyce said. On the other hand, many tenants knew they would never be able to find another NYC home that they could afford. The tenants were paying as little as $300 per month in rent; most were on fixed incomes.

Eventually, the Landmarks Preservation Commission decided to designate the whole complex as a landmark, except for the end building, which was a hotel for single women. For Joyce, this wasn’t good enough.

“That building [was] part of the complex. It was equally important, if not more so,” Joyce said. “It was built for single women to come and sew and eat and not have to worry about men, because it was a scary city for single women.”

Despite pressure from politicians, the commission, and members of the historic preservation community to take the deal, Joyce and her team decided not to settle. They filed an Article 78 proceeding, arguing that the Landmarks Preservation Commission’s decision was unlawful. 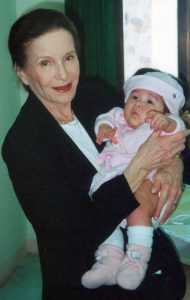 Joyce Matz with her grandchild, Chloe Matz, at her adoption ceremony in
Vietnam.

The case returned to court, and the Coalition to Save City and Suburban Homes won. The entire complex was saved.

In her free time, Joyce was an avid reader and writer.

“She always had a book in her hand,” Suzanne said. “She loved poetry.”

Joyce was also known for being an animal lover—she donated to many causes that saved endangered species around the world. She spent her later years traveling to Africa and Alaska to see animals in their natural environment. She trained Vizslas, a breed of hunting dogs to show and be of service to those with disabilities.

For the New York City preservation world, Joyce was a good friend.

“You would naturally click with her,” Wood said. “She was just someone who became a part of your life.” 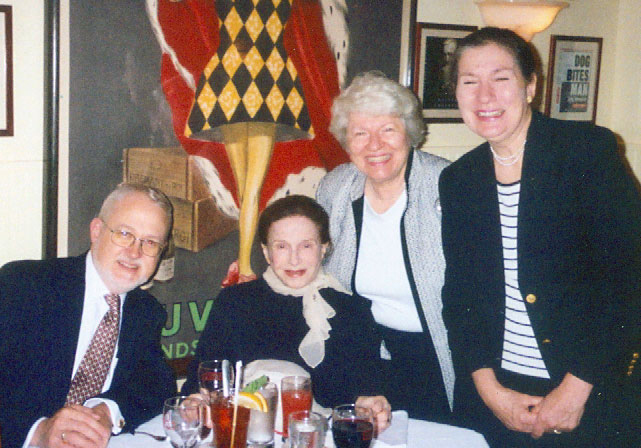 Joyce first heard about The Trust through fellow preservationist and Trust donor Arlene Simon. In 2006, she established a fund, making The Trust a beneficiary of her retirement plans. 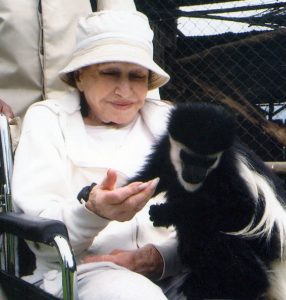 Joyce Matz with a black-and-white Colobus monkey in an African preserve.

On September 13, 2017, Joyce passed away at the age of 92. Suzanne donated Joyce’s archives to the New-York Historical Society. The archives are open to researchers.

“We want the grants to reflect Joyce’s spirit,” Wood, who co-advises the fund with Suzanne Matz, said. “We are looking at grassroots, feisty efforts that may not be getting the support of mainstream [funders].”

The Trust thanks the New York Preservation Archive Project and Keenan Hughes for their contributions to this biography. Their 2007 interview with Joyce informed the writing.

*All quotes from Joyce in this biographical sketch are from a 2007 interview conducted by the New York Preservation Archive Project.