“I grew up in Boston, but I love New York. It continually expands my horizons. I’m very lucky I can give back. I needed to rewrite my will a few years ago. When I learned about The Trust, it just fell into place for me.” 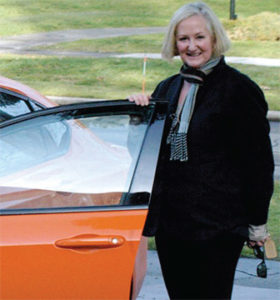 Kate McLeod, who lives on the Upper West Side, drives a 1997 GMC Sierra and is restoring a 1962 VW Beetle.

New York has been my nirvana. I’m so happy to be able to give back.

I worked for a decent salary, and made a couple of smart moves in real estate. My husband, Jerry Flint, grew up poor in Detroit. After serving in the Army in Germany in the 1950s, he became a journalist. He worked for the Wall Street Journal, the New York Times, and Forbes, parlaying his love of autos into a career. He was known as the “Dean of Automotive Journalism.”

Jerry knew when auto executives were bluffing. He knew their numbers better than they did, and you can trace the crisis of the American automobile industry through his Forbes columns. I wrote about autos, too. We worked hard, and shared the sheer pleasure of driving fast cars on twisty roads.

Years ago, someone urged us to write a will. I thought our money should go to a homeless shelter I’d read about.

After Jerry died in 2010, an excellent legal advisor told me about a foundation called The New York Community Trust. By then, I’d done enough reporting of my own to realize a homeless shelter that’s impressive today might not even be operating in five years.

My will asks the program staff at The Trust to use our money in perpetuity to help nonprofits that help disadvantaged students when they’re young. That’s where you can make the most impact.

I grew up in Boston and moved to New York in 1974. Everything good that has happened to me as an adult has happened to me since I came here. I love this city. I met Jerry here, and we had 25 wonderful years together. I say they’re going to take me out of here on a gurney. One day I’ll walk out and it’s spring in Riverside Park and the last thing I’ll see is the cherry trees blossoming—and that’s it, a happy ending.

Then, as I cruise along the next set of twisty roads, The Trust gets to change some lives.