Leading the Fight Against AIDS 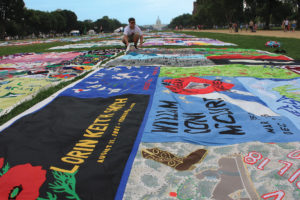 THE AIDS QUILT: The quilt covered the National Mall before touring across the United States to spread awareness of the disease. 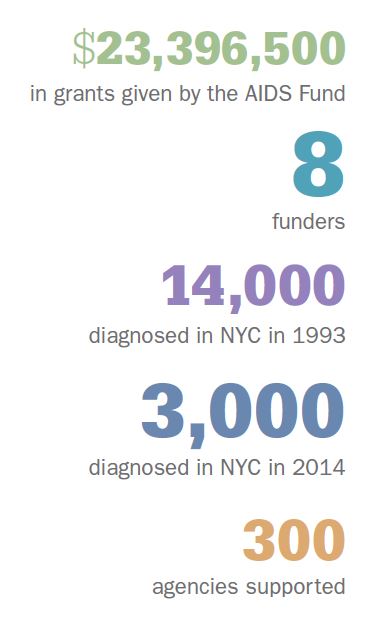 THE AIDS FUND: Statistics from the AIDS collaborative fund in 2016.

In the 1970s a few New York physicians began to notice a worrisome pattern of illness in young gay men: patients with a litany of conditions that included unusual pneumonias, a rare skin cancer, joint pain and soaking night sweats. It took several years to learn what this mysterious ailment was.

The first case of AIDS in the United States was identified in 1981, quickly followed by a deluge of others. Initially many foundations were slow to react, reluctant to provide funds for a disease they knew little about, other than that it disproportionately affected gay men and intravenous drug users.

The New York Community Trust was an early leader in supporting programs combating AIDS. The Trust made its first grant for HIV research in 1983, and six years later launched the New York City AIDS Fund with the National Community AIDS Partnership, a consortium of foundations and corporations. Housed at the Trust, the AIDS Fund operated from 1989 through 2014, uniting grant makers, local and State government agencies, human services organizations and those living with AIDS toward a common goal of providing services to patients and funding research to develop improved treatments and ultimately eradicating the disease.

The AIDS Fund was instrumental in informing the New York philanthropic community about needs and issues related to the AIDS epidemic. It was also one of the City’s most important sources of private funding for a sustained local response, and played a major role in improving the coordination and targeting of City resources. In 2009 Mayor Michael Bloomberg honored the Fund for its outstanding commitment to improving the lives of New Yorkers affected by AIDS.

Others have now stepped in. Through partnerships, the AIDS Fund has helped New York City move closer to a collective vision of a world free of HIV. Since 2006, the AIDS Fund has partnered with the Council of Fashion Designers of America (CFDA) through the CFDA–Vogue Initiative, a companion fund to the New York City AIDS Fund. CFDA’s fundraising efforts included the successful 7th on Sale and Fashion’s Night Out events. The CFDA Fund continues to support causes helping New Yorkers who are living with HIV/AIDS.

This piece was originally published in “Stronger Together: The Power of Funder Collaboration” in August 2016. The AIDS Fund has now run its course, but The Trust still funds research and other efforts supporting those with the chronic disease.