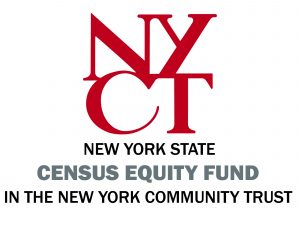 (9/14/20) New York, NY – The New York State Census Equity Fund (NYSCEF) recently announced its fourth round of grants, totaling $601,650, to 23 organizations to support efforts across the state to reach hard-to-count communities in the 2020 Census.

The funding comes at a critical time for these nonprofits, which are urgently working to count as many New Yorkers as possible before the count ends.

In mid-August, New York State’s census self-response rate was just under 60 percent, and New York City had a response rate of just about 55 percent, trailing the national average of 64 percent by nearly 10 points.

Millions of New York households are at risk of going undercounted, which would mean that, for the next decade, New York could receive far less than its fair share of the trillions in federal funding distributed every year according to the census count.

Not only that, but New York could lose two representatives in Congress, weakening its voice in government at a moment when it’s needed most.

With the recent Census Bureau announcement that it is aiming to end the door-knocking phase a month earlier than previously planned, time is running short.

“The organizations we’re supporting in this round of grants have earned the trust of the communities they serve,” says Pat Swann, The New York Community Trust’s civic affairs senior program officer. “This trust, coupled with a shared language and relationships with local residents, is the key to successful census outreach.”

Organizations receiving funds in this fourth round of New York State Census Equity Fund grants are working in communities that have some of the lowest self-response rates and high concentrations of “hard-to-count” populations, in places like Buffalo, Yonkers, Queens, Brooklyn, the Bronx and Hempstead on Long Island.

Many of these organizations have been working to increase self-response rates all year. But when the Census 2020 timeline shifted because of the COVID-19 pandemic, their work became more urgent.

NYSCEF’s final round of funding will help these organizations continue their Get-Out-The-Count (GOTC) work when their funding from many other sources has run dry.

“COVID-19 has added a massive hurdle to the already difficult task of achieving an accurate count,” said Randi Hewit, president of the Community Foundation of Elmira-Corning and the Finger Lakes. “This latest round of grants will help nonprofits across New York state that are working to reach refugee and immigrant communities who have been historically undercounted in the census.”

The Fund, which is housed at The New York Community Trust, brings together local, regional, and national foundations and individual donors to support a diverse array of projects that span from western New York to Long Island. Representatives from foundations across the state advise on the Fund’s grantmaking in their areas.

This round of grants includes:

*NYSCEF Grants to organizations in Western and Central New York regions flowed through funding partner Community Foundation of Elmira-Corning and the Finger Lakes. All other grants were made directly by The New York Community Trust.

In its first grantmaking round in 2018 and the first half of 2019, the Fund distributed grants totaling more than $600,000 for organizing and education activities statewide or across regions. Those included grants to the New York Immigration Coalition, Partnership for the Public Good, Health and Welfare Council of Long Island, Asian American Federation, New York Civic Engagement Table, Craig Newmark Graduate School of Journalism CUNY Foundation, and The New School’s Digital Equity Lab.

In its second round of grants, distributed in December 2019, NYSCEF awarded more than $1.4 million to community-based organizations with solid plans to engage a diverse array of populations statewide.

A third round of NYSCEF targeted outreach and grantmaking occurred in March 2020, when the Fund’s steering committee identified under-resourced areas upstate for Census GOTC efforts and distributed an additional $115,000 in “mini-grants” to 37 organizations.  Since its formation in 2018, NYSCEF has made 132 grants to maximize Census responses across New York State.

About The New York Community Trust

The New York Community Trust connects past, present, and future generous New Yorkers with vital nonprofits working to make a healthy, equitable, and thriving community for all. We are a public grantmaking foundation dedicated to improving the lives of residents of New York City, Westchester, and Long Island. For more information, visit us at nycommunitytrust.org.