It is estimated that more than half of American adults do not have wills, and while it is easy to understand why the typical 20-year old doesn’t, it’s harder to understand for a 50- or 60-year old. Death and taxes are surely no less certain than they were in the era of Benjamin Franklin’s famous dictum. Is it that some people think they don’t have enough property to need a will? Is it simple avoidance because they’re not planning on dying anytime soon? Is it the superstitious belief that the making of a will might accelerate the inevitable? Whatever the “reason,” it is almost always insufficient to justify the result, which is to die intestate (i.e., without a will).

A will, at its most basic level, is a set of instructions stipulating who gets what and who manages the testator’s property immediately after the testator’s death. For those with adequate wealth, it is also one of several documents that, taken together, create an estate plan designed to minimize estate taxes and ensure an orderly administration of property following the testator’s death. A will also is used to appoint a guardian if there are minor children.

Distribution of assets if there is no will

A will ensures assets go to the people and charities your client chooses. Otherwise, assets will pass in accordance with state intestacy laws, except to the extent the assets pass directly to named beneficiaries by operation of law—as may be the case with retirement accounts or life insurance proceeds or property held in joint and survivor name. Assets that pass under the terms of the will—or, in the absence of a will, by intestacy—are referred to as the probate estate.

If there is no surviving spouse but there are descendants, the entire probate estate in an intestacy will pass to the deceased person’s descendants. 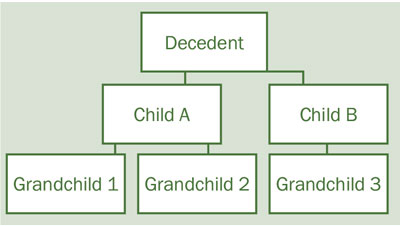 These children, grandchildren, or even great-grandchildren will take by representation. For example, if the descendants’ distributable portion of the estate were $100,000, and if Child A, in the diagram above, predeceased the decedent but Child B survived, Child’s A’s surviving children (Grandchildren 1 and 2 in the diagram) would share their deceased parent’s share equally ($25,000 each) and Child B would receive $50,000. However, if Child B had also predeceased the decedent, all three grandchildren (1, 2, and 3) would share the distributable amount equally ($33,333 each). (This scheme is different from a so-called per stirpes division, which appears in many wills; in a per stirpes distribution, Grandchildren 1 and 2 would each receive $25,000, and Grandchild 3 would receive $50,000 if Child B predeceased).

If there are no descendants and no spouse, the probate estate instead passes to the decedent’s parents, equally, or all goes to the surviving parent. If no parents survive, the estate passes to the deceased person’s siblings (or children of a deceased sibling). Half siblings count the same as whole siblings.

In the absence of a surviving spouse, parent, sibling, or descendants of siblings, the probate estate generally will pass one-half to the deceased person’s mother’s relatives, and one-half to the father’s relatives, according to a specified order that begins with grandparents on each side and continues with collateral relatives as distant as the decedent’s first cousins once removed (great-grandchildren of the decedent’s grandparents). If the closest surviving relative is a second cousin (a great-great grandchild of the decedent’s grandparents) or more remote relative, the estate passes (“escheats”) to the State of New York. The absence of a will raises the possibility that the decedent might benefit distant family members with whom the decedent had no close relationship, or that the decedent’s property might pass to the state, rather than favored charitable causes such as The New York Community Trust. Intestacy rules vary from state to state.

If there are no surviving family members, the probate estate will escheat to the State of New York.

For an individual who owns a business, has unusual assets, wants to provide for charity, such as by creating a charitable fund at The New York Community Trust to carry out a charitable interest, or has a family member with special needs, a properly executed estate plan including a will is a must.

A will should be updated if there is a major life change. While this can be done by codicil, it is usually recommended that a new will be signed, so that anyone who had had an interest under the original instrument but has been omitted does not necessarily have to receive notice of the probate process.

Major life events that call for updating one’s will include:

The best way to find a lawyer to prepare a will probably is to ask friends for a referral. Alternatively, the local bar association may have a referral service. If finances and ownership of assets are fairly straightforward, an online free will may be better than nothing. But it is strongly recommended that even this be reviewed by an experienced lawyer.

Many lawyers have a checklist to help a prospective client identify their assets, including insurance and retirement accounts; family members; and others—including charity—that they want to benefit. Beneficiary designations on any accounts also must be taken into consideration. Periodically, it is a good exercise to ask insurers and custodians of pension assets to confirm who is on file as the beneficiary of life insurance and plan assets. Because the formalities for changing these designations are so limited, it is a very easy thing to update to align with current wishes.

The executor generally submits the will for probate and marshals the estate’s assets. As a practical matter this may mean supervising cleaning out a home or apartment, and locating financial and other assets. When a lawyer drafts a will, he or she normally will ask the client for a list of all assets, which will be used to help the executor.

Identifying an executor is often a stumbling block to finalizing a will. For a person without a spouse or children, the most obvious person is a trusted friend. But if one’s friends are the same age or older, there is a good chance they won’t survive—or won’t have the desire to handle the estate administration—in which case naming a potential successor is good practice. Another option is to name a bank or other institutional executor, although the bank should be consulted on its willingness to serve. In some cases, a lawyer who drafts the will may be willing to serve. In New York, the client will be asked to execute a disclosure, separate from the will, acknowledging that the attorney may receive a full statutory commission as executor and be paid reasonable compensation for providing legal services to the estate. This must be witnessed by someone other than the designated executor.

Who submits a will for probate?

Individuals are often reluctant to tell family members that they have a will and where the original is, but that is of critical importance. Commonly, the original will is stored safely in an attorney’s safe or vault, but it is incumbent upon the client to leave instructions for the executor or next of kin about locating that original document. It should not be kept in a safety deposit box, which will be sealed upon the owner’s death.

A will ensures assets go to the people and charities your client chooses. In the absence of a will, assets will pass in accordance with state intestacy laws, except to the extent the assets, such as IRA accounts, may pass directly to named beneficiaries by operation of law. A will should be updated if there is a major life change that may affect intended beneficiaries.

This material was developed for the use of professionals by The New York Community Trust. It is published with the understanding that neither the publisher nor the author is engaged in rendering legal, accounting, or other professional advice. If legal advice or other expert assistance is required, you should speak to your own tax or other legal or accounting advisor.