Spotlight: How The Trust Is Making Life Better for Our City’s 9,000 Young People in Foster Care 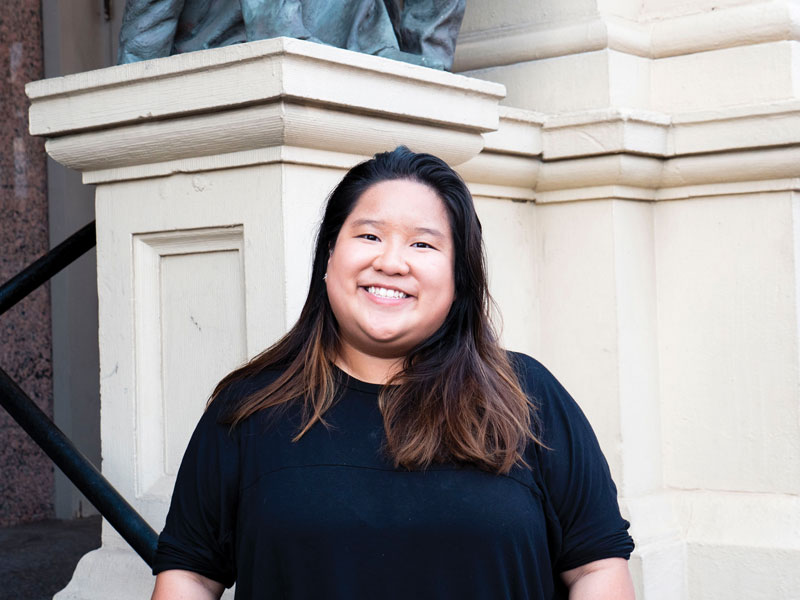 COLLEGE GRAD: Melanie, 22, participated in a program at HeartShare St. Vincent’s Services for older foster youth. Today, she is a graduate of the University of Buffalo, where she majored in International Studies.

Through grants to Graham Windham and HeartShare St. Vincent’s Services, we’ve helped hundreds of kids on their way to college and careers. But that was just a start.

We wanted all young people in foster care to have access to these life-changing programs. This story is about how we are making that happen.

When asked how he had felt as he approached 21, when he would age out of foster care, Tamaine looked his questioner dead in the eyes and said: “I was terrified.”

Now 24, Tamaine recalled speaking with friends who left the system and became homeless. “They walked me through the horror story of how they had no support, became overwhelmed, and gave up. I had all that stuff beating at the back of my brain…this potentially could be me.”

Programs like Graham SLAM are created to compensate for the trauma and challenges of children in foster care. In New York City, children are placed in foster care after the City determines there has been neglect or abuse within their family. Officials place the child with a relative, a foster family, or a residential facility. For these children taken from their families, there is quite literally no place like home.

“They are in foster care,” said Dawn Saffayeh, executive director of HeartShare St. Vincent’s Services (HSVS), “because their parents have not been able to care for them and even provide for their basic needs.”

These children often are pulled across a bureaucratic patchwork of changing adults and peers.

“It’s just a constant change of faces,” said Tamaine. “You don’t have the safety net to feel like you can adequately connect to anyone.”

As they struggle to find their bearings, children also pass through an education system that can’t always slow down to prepare them for adulthood, which, in New York, starts by regulatory fiat at 21.

“We used to rush a lot of things to get kids set up by 21,” said Jess Dannhauser, Graham Windham’s president and CEO, “knowing that this might not be enough.”

A Chapin Hall report found many of those who’d aged out of foster care had not done well by age 26: 71 percent of young women had become mothers, 47 percent were unemployed, and 36 percent had been homeless. It found more than half of foster care youth had been arrested, convicted, or spent a night in a corrections facility by 17.

Funded in part by The New York Community Trust, a few nonprofits expanded support until young people reached 26, helping them get through college or into a good career.

“We can’t just cut them off suddenly,” said Dannhauser. “It doesn’t happen in most natural family situations. We shouldn’t allow it here.”

Programs begin with a coach who helps the young person through any problem, whether it is academic, financial, mental health, housing, or bureaucratic.

“The child welfare system has a lot of people in the lives of kids and families, but they all have very bureaucratic, prescribed roles,” said Saffayeh. “Our coaches really start with just building trust.”

“I let it be known from day one,” said HSVS coach Ayesha Young, “that I am here to support you in any form or fashion, and I am ready whenever you are.”

“What people don’t understand [about foster care children],” said Ericka, a college student with HSVS, “is that the behavior that we typically have that may come off as aggressive or rude is really just being misunderstood…It’s the trauma, it’s the self-esteem issues, it’s the loving yourself issues…Whenever somebody good comes around, you push them away because they’re not going to be here for long anyway.”

“They proved my doubts wrong,” Ericka continued. “They stood by me in hard times. They were just there for me.”

With a trusting relationship, the coach and young person make plans and arrange for needed services, whether it’s getting a Social Security number, tutoring, or dealing with anxiety.

Ayesha calls her cellphone “the hotline,” noting she gets calls days, nights, and weekends.

“Basically, it feels like I’m living in a dream world sometimes,” Ericka said, “that I have someone like [my coach] in my life.”

“I never really celebrated myself until they celebrated me,” Ericka said. “I have more of a reason to look forward to accomplishing things and making them proud.”

Graham SLAM found more than 90 percent of its participants achieved education milestones and/or were employed. HSVS’ American Dream Program found 80 percent of participants persisting or graduated from a post-secondary program and 16 percent exploring other career paths.

Both organizations are expanding to middle school. Ericka, now 22, recounted struggling as a younger child. When her life got tough, she would feel alone and misunderstood. “I would just do bad things,” she said. “I would do self-destructive things.”

“I didn’t know who I was,” Tamaine said of his teen years. “I wanted to fit in and belong to a group.” He fell in with students who cut classes and struggled academically.

Today Tamaine relies on his coach, Derrick Johnson, as an advocate and as a role model.

He recounted Johnson taking him to a Thai restaurant for lunch. There, Johnson told Tamaine that no matter what happened, “I will be a part of your life for the rest of your life.”

“It was one of the most touching things I’ve encountered in my whole entire life,” Tamaine said.

These isolated success stories may very well turn New York City into a model for a nation that desperately needs to repair how it cares for the children it steps in to steward.

The success of these programs led The New York Community Trust to fund a campaign to expand the program to all City foster care agencies. 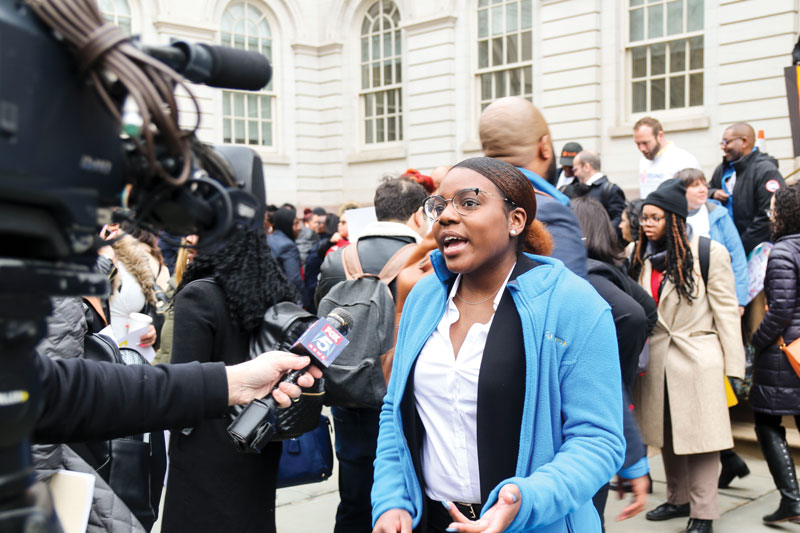 AT CITY HALL: Dominique “Dylan” Tatom, an HSVS ADP Scholar, is interviewed by Fox 5 News about the need for additional public funding for foster care at a Fair Futures campaign rally.

“This coaching model is an example of the power of philanthropy,” says The Trust’s Natasha Lifton. “It’s where private funds incubate a solution for the public sector.”

The early successes of the programs coincided with the opening of a window of opportunity, The City’s Interagency Foster Care Task Force recommended coaching support from high school to the age of 26, and intensive academic help in middle school.

This led The Trust to fund and help organize the Fair Futures Coalition. This group of more than 100 funders and service organizations campaigned for public support of long-term, comprehensive coaching. Last June, the City agreed to earmark $10 million to provide support to more young people who need it.

You can give to The New York Community Trust’s Foster Care Excellence Fund in three ways:

Learn more about The Trust’s work with children and teens.