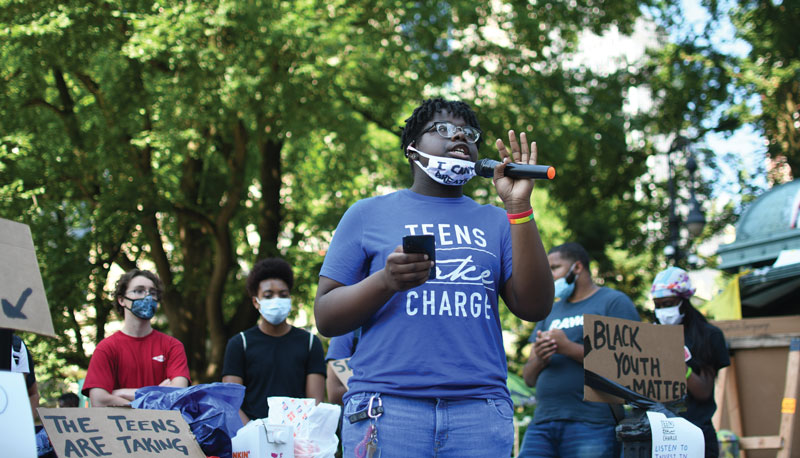 TEENS TAKE CHARGE: A member of The Bell speaks at a rally outside City Hall to save the Summer Youth Employment Program. Photo by The Bell student photographer Dulce Michelle

While police brutality has been the focus of recent protests and media coverage, the effects of systemic racism can be seen in all aspects of society. The Trust has addressed these injustices across a number of important fields.

Owning a home is one of the most important ways to establish wealth and pass it to succeeding generations. However, for many low-income Black families, this staple of the American dream has been difficult. Grow Brooklyn has used a Trust grant to expand a multi-faceted program, called Protect Your Treasure, to build homeownership among Black families.

For families, one of the problems has been the complexity of navigating Surrogate’s Court, which handles the disposition of a deceased person’s assets. Because low-income heirs often cannot afford an attorney, they struggle with the proceedings and sometimes fall prey to scammers who deprive family members of the assets to which they are entitled.

Because of the life-threatening pandemic, there has been an increase in demand for Grow Brooklyn’s services, particularly for the execution of wills and health proxies, but the organization has had to move from in-person to virtual work. Protect Your Treasure now holds online workshops for seniors regarding the need for an end-of-life plan and works with them to develop one.

Additionally, it has been providing access to lawyers who can help with the probate and foreclosure process over the phone. To assist clients involved with Surrogate’s Court proceedings, it has been using an online filing system initiated because of the pandemic.

Since it was the fictional setting for the 1920s Gold Coast mansions of The Great Gatsby, Long Island has been popularly known for its wealthy residents, but racial segregation has exacerbated a widening wealth gap for many Black families. To help lift up these residents, our Long Island Community Foundation organized the Long Island Racial Equity Donor Collaborative Fund, a partnership of 12 banks and foundations, in 2018.

“The Long Island Community Foundation has a longstanding commitment to ensuring everyone here has access to the social and economic prosperity of the region, regardless of race or income,” said David Okorn, its executive director, citing its Erase Racism initiative that has addressed systemic inequities in housing, education, and public health for nearly 20 years.

The Collaborative hired the Urban Institute to create a plan to address financial inclusion, credit access, and financial stability among Long Island’s Black families. These issues were cited in studies by the New York Federal Reserve Bank and PolicyLink that were commissioned by the Collaborative.

The Urban Institute reviewed key drivers to promote wealth and Long Island’s nonprofit programs. The study identified the need to build capacity and coordinate the nonprofit sector, particularly in regard to employment; improve access to programs promoting financial security; and address the perception that Long Island was solely an enclave for wealthy white communities.

This spring, the Collaborative released a request for proposals to close the gap. It also awarded a grant to Prosperity Now, an organization with deep experience in advancing racial equity.

“The racial income gap in Long Island prevents the advancement of the economy as a whole,” said New York State Attorney General Letitia James. “I am proud to support the Collaborative’s efforts to promote policies that create opportunities for financial security for Black Long Islanders. Recognizing and addressing structural racism must be the first step in seeking economic justice.”

Black women are eight times more likely to die during childbirth than white women in New York City. This tragic disparity in access to health care takes into account differences in wealth and education.

Research has begun to point to several contributing factors for the differences in morbidity rates: higher levels of stress and trauma among Black women, health-care provider biases, and the perceived power imbalance between medical professionals and patients.

Using a grant from The Trust, the Fund for Public Health in New York, a public-private partnership, is working with 14 public and private hospitals that are responsible for half of all Medicaid-funded births in the city. The grant is improving the hospitals’ data collection, promoting respectful maternity care, and helping staff recognize their own unconscious biases toward treating women of color. In the fall, it will train Birth Justice Defenders—peer educators to coach pregnant women on their health care rights. Because of the pandemic, the hospital implicit-bias trainings were moved online. 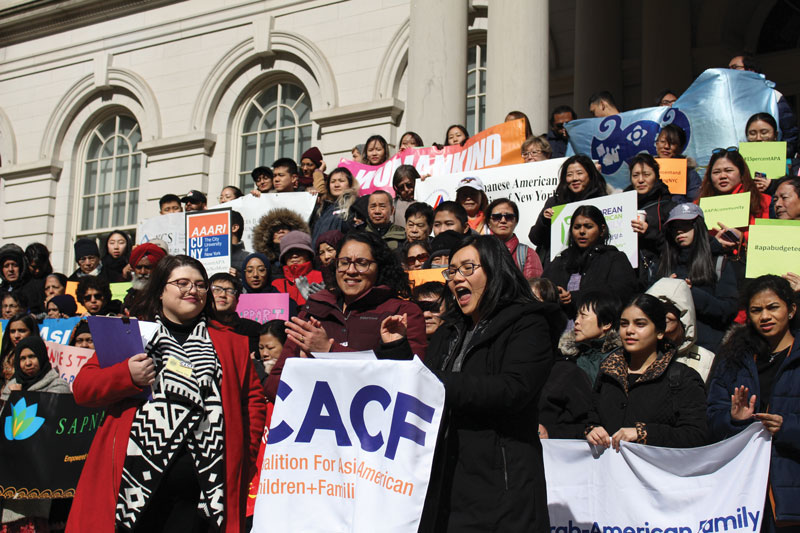 INCLUSIVE BUDGETS: The Coalition for Asian American Children and Families gathered with other organizations on Asian Pacific American City Advocacy Day to call for equity in the city’s budget.

The Trust has given grants to two organizations working within their respective communities to advocate for educational equity.

The Bell* is training students to fight for integrated schools and to participate in education policy discussions. Last year, its Teens Take Charge program created six policy recommendations that were adopted by the city, including the creation of a student General Assembly with representatives from every high school.

The group is pushing the city to provide low-performing schools with more college and career counselors, internship coordinators, test preparation classes, and student access to advanced coursework at other schools nearby.

After Mayor de Blasio proposed eliminating the entrance exam for the city’s specialized high schools, including Stuyvesant, Bronx High School of Science, and Brooklyn Tech, the ensuing controversy often pitted communities of color against each other.

With a grant from The Trust, the Coalition for Asian American Children and Families is working to help shape an inclusive educational policy that provides a quality education to all students. The Coalition will work with its constituent families so they can advocate for education reform and ways to improve the system. It also will organize meetings between Asian groups and representatives of other communities of color to promote mutual understanding.

*In the print edition of this news story,  The Bell was referred to by its legal name, Bell Voices.