The Pen Is Mightier Than the Sword: Writers Mobilize to Defend Free Speech 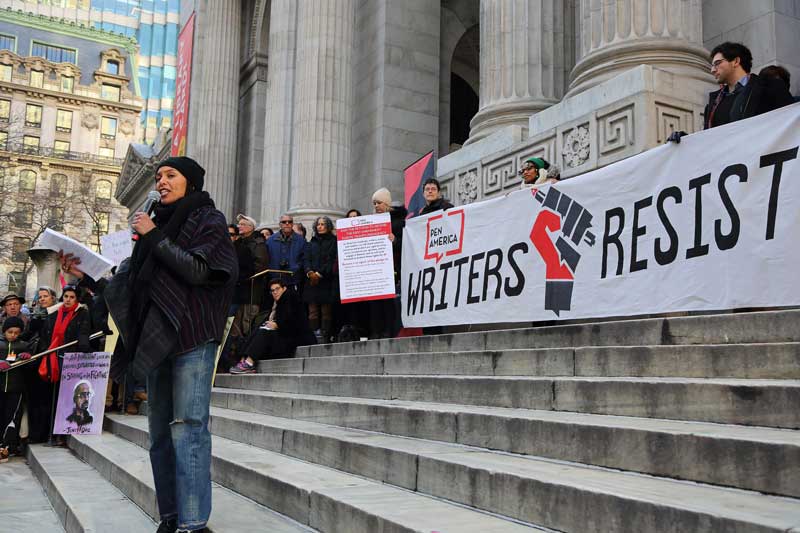 FREEDOM OF SPEECH: A 2018 Pen America rally on the steps of the New York Public Library.

Writers play a vital role in public life in New York. Many want to use their words to counter anti-Muslim, anti-immigrant, racist, misogynist, and anti-LGBTQ rhetoric and policies. From writing petitions and op-eds to affect change, to authoring books and screen plays that delve into issues that impact us all, writers like Margaret Atwood, Jenifer Egan, and Wajahat Ali are using their craft to mobilize Americans.

To give them a hand, we’re giving PEN America a grant of $250,000 to help transform and expand an informal network of literary groups into a coalition of 60 organizations called The Literary Action Network.

“We believe that writers have a critical role to play, not just individually, in terms of offering their creative works, opinions and ideas, but also as a collective that stands for a certain set of values that underpin open expression,” says Suzanne Nossel, CEO of PEN America.

A FUND FOR WRITERS: Eleanor Franklin Egan was an American journalist and foreign correspondent for the Saturday Evening Post from 1915 to 1925. After her death, her husband, Martin Egan, created a fund in The Trust to honor her passion for the written word. Their fund supported this work.