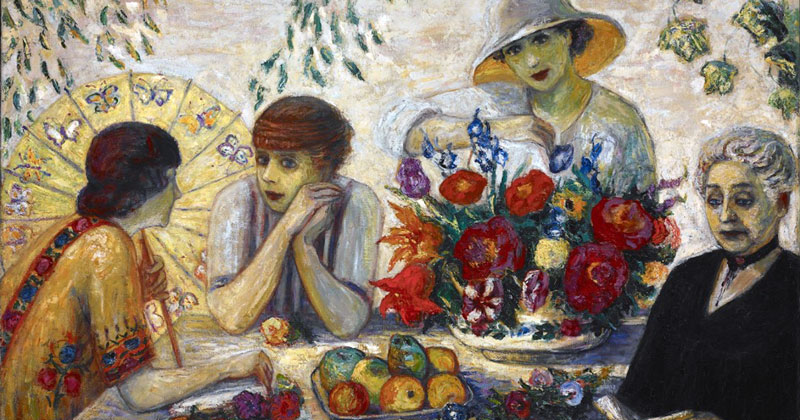 Family Florine, Ettie, and Carrie Stettheimer broke the mold. Never marrying, they lived with their mother on the West Side of Manhattan in the early 20th century. They made art, wrote, and hosted the city’s premier salon of the day. Guests included Gertrude Stein, Georgia O’Keeffe, and Marcel Duchamp.

Ettie, the youngest, left a gift in her will to start a fund in The New York Community Trust.

We hope her family’s story inspires you to fund the causes you care about—and turn your dreams for New York into reality.

They were so funny, and so far out of what American life was like then.” – Marcel Duchamp

It’s Florine Stettheimer, the artist, who’s better remembered than her sisters Carrie and Ettie. But in their day, it was as a trio of entertaining hostesses at their salon that they epitomized New York City’s jazz age. 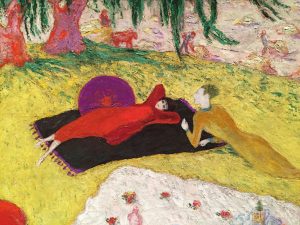 Picnic at Bedford Hills, 1918 (Detail), by Florine Stettheimer, depicting her sister Ettie. Courtesy of the Pennsylvania Academy of Fine Arts.

The five Stettheimer children, born in the second half of the 19th century into a prosperous German-Jewish banking family in Rochester, New York, early on experienced a profound family trauma: the father, Joseph, walked out.

The older siblings, Walter and Stella, got married and moved away. Florine, Carrie, and Ettie stayed together.

The three sisters were fiercely protective of their mother, Rosetta, who developed what was euphemistically called an “epicurean way of life,” involving a life of leisure oriented on artistic pleasure. Travel to Europe was an essential piece, and the quartet spent from 1906 to 1914 in Berlin, Stuttgart, and Munich.

Sensing the threats of what was the First World War, the four Stettheimers moved to New York and settled in a sizable apartment on the West Side. Given their artistic enthusiasms, it was not surprising that they established a successful salon that was frequented by prominent artists, writers, critics, and European expatriates. During the glitziest days of the Roaring Twenties, the sister threw lavish weekend parties at rented mansions on Lake Placid and the Jersey shore, escaping the swelter of summer (and the constraints of Prohibition). 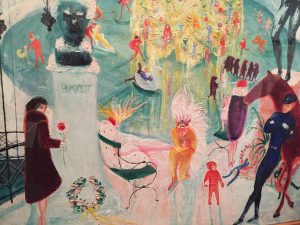 TO EACH HER OWN

Each sister had her role: Florine was the artist and chief salonière; Carrie ran the household, overseeing the décor, meals, and furnishings. Ettie was the writer, the wit, the conversationalist. Mrs. Stettheimer, who died in 1935, was a passive “materfamilias,” enjoying her daughters’ talents from a distance.

Carl Van Vechten, the Twenties’ “New York hipster and literary gadabout,” as The New Yorker called him, described the three sisters as “an exotic if somewhat strange trio: Ettie in red wig, brocades, and diamonds; Carrie, who dressed never in the fashions of the day but in the elegance of a past era; Florine in white satin pants.” 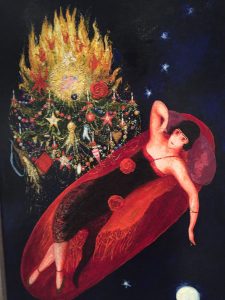 The Stettheimers, he added, typified the idea of the “new woman” of the 20th century. “They declared men impossible but worthy of flirtation,” he wrote. “They wore pants, smoked cigarettes, disdained marriage, romance, and children, and were constantly surrounded by artists and writers who were drawn to their soigné gatherings.”

Although Florine was not widely recognized for her painting talent in her lifetime, she was applauded for her work designing diaphanous sets and costumes for “Four Saints in Three Acts,” a groundbreaking 1934 opera by Virgil Thomson with a libretto by Gertrude Stein.

Florine is now recognized as one of the most intriguing and visionary painters from the New York arts scene in the first half of the 20th century. Her paintings hang at the Metropolitan Museum of Art, the Brooklyn Museum, the Jewish Museum, Columbia University, and many other institutions.

A HOUSE OF ART 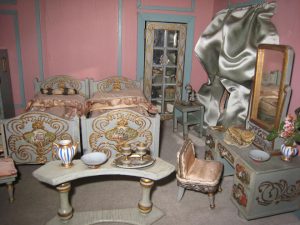 The Stettheimer Dollhouse (Detail) is a two-story, 12-room dollhouse created by Carrie Stettheimer from 1916 to 1935. Courtesy of the Museum of the City of New York.

Carrie’s contribution to the arts was more whimsical than her sister’s. During the Depression, a popular pastime for society women was building dollhouses that replicated their private rooms and featured diminutive objects and paintings crafted by eminent artisans. Assisted by Florine, Carrie created the Stettheimer Dollhouse, now in the collection of the Museum of the City of New York. The house is a delightful depiction of an upper-class residence, filled with works by the sisters’ artist friends, including William Zorach, Alexander Archipenko, Marcel Duchamp, and Gaston Lachaise.

Ettie, Florine’s executrix, wisely declined her sister’s request to destroy her works at her death in 1944. Forty-five works were given to 37 institutions, assuring the continued fame of this eccentric artist. In turn, in 1955, at Ettie’s death, her executors determined that the best and most lasting way to honor Ettie’s legacy was by establishing a permanent, charitable fund in The New York Community Trust that will make grants in perpetuity, to foster the arts and improve the lives of New Yorkers.