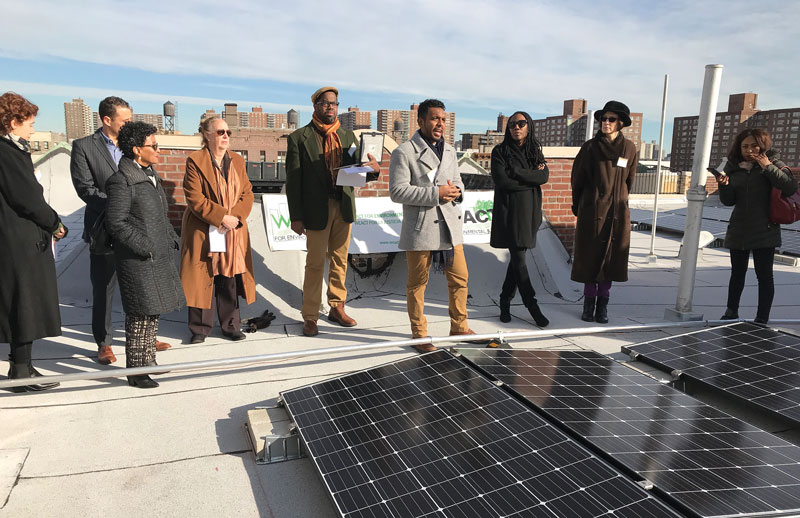 Nonprofit developers of affordable housing have been missing out on the clean energy economy, and so have their tenants. Federal tax credits for installing rooftop solar panels are geared to homeowners, not renters, so many low-income communities not only miss out on the subsidies but end up paying higher energy bills—plus they’re exposed to more pollution. Some people call it the “green divide,” and The Trust is helping bridge it.

Five years ago, Gov. Cuomo committed nearly $1 billion to expand solar projects statewide. And eligible customers, including tenants, will receive credits on their electric bills for energy produced by the sun. We’re helping two nonprofits shine some of the benefits on low-income communities.

With our two-year grant of $300,000, Solar One will work with its partners to install solar gardens atop three New York City Housing Authority affordable housing complexes, lowering energy costs for 350 families, and placing at least 10 residents in solar industry jobs. Solar One will also bring solar power to at least 25 additional affordable housing buildings and develop new ways to finance solar projects.

Over the next two years—working closely with Solar One—Joint Ownership Entity New York City, known as JOE NYC, will use $140,000 to install the City’s largest affordable housing solar energy project. The organization, which pools thousands of apartments owned by nonprofits, making them more efficient and competitive, will arrange financing, monitor installation, and manage rooftop solar systems on 14 buildings. Energy credits earned will offset utility bills for the buildings’ common areas, such as lobbies and laundry rooms, lowering costs for residents.