For 95 years, The New York Community Trust has served as New York’s community foundation—granting more than $4.6 billion to support nonprofits.

But where, exactly, does that money go? Which causes do philanthropically minded New Yorkers care most about? And how has their giving changed over the years?

To answer these questions, we mined The Trust’s data and interviewed and surveyed scores of donors to create this 2019 Philanthropic Trends Report, which looks at the last 20 years of giving in America’s largest city.

Among the key findings: 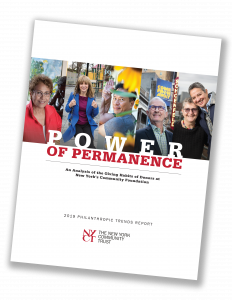 Download the report here or view on ISSUU. You can also request printed copies from Vice President for Philanthropic Initiatives Kerry McCarthy at (212) 686-2578 or kem@nyct-cfi.org.

Read the press release about the report.

If you are a member of the media and would like to interview Trust staff or donors, or feature the report in other capacities, please contact Senior Communications Officer Amy Wolf at (646) 214-1004 or aw@nyct-cfi.org.